Below, you will find a list of the 10 most common Russian first names given to newborns in Moscow in 2011. The list is in alphabetic order. Sound out the names and decide whether they should be on the list of names for a ма́льчик or a де́вочка.

The names above, like Алекса́ндр or Мари́я, are official names--they are what would appear on one’s birth certificate. However, in the same way that someone named David in English can be called Dave or Davey, these children are probably often called by diminutive or nickname versions of their names. Sometimes one name can have more than one diminutive.

What do you notice about the ending of almost all of the diminutive names in Russian?

When these children get a bit older and start elementary school, their teachers may occasionally call them by their last names. Many Russian male last names end in –ов, –ев or –ин, and female ones end in –ова, –ева or –ина. In this activity we will work on these types of last names.

Listen to the audio to get the first name of the person and then mouse over the form of the last name that matches it in gender. Note that Russian last names are sometimes extensions of first names, but they can also come from animal names, professions or place names.

If you look back at our host families, note that each of them appears to have “three names”--a first name, a last name, and one more in the middle. The one in the middle is called a patronymic о́тчество.

When young people finish their education and enter the adult world of the work place and public life, then they will most likely be addressed in formal situations by their first name (и́мя) and the patronymic (о́тчество), a form of the father's name.  We've met one Russian character so far whose о́тчество we know: Ната́лья Миха́йловна За́йцева. From Миха́йловна we know that her father was named Михаи́л.  If she has a brother, his name might be:  Серге́й Миха́йлович За́йцев.

Look at the first names below and complete the form of the patronymic, adding –вич for males, and –вна for females. The first two have been done for you.

Look through the list again, and see if you can find any possible siblings or spouses.

If you address a Russian using и́мя and о́тчество, then you will also be using the formal вы with them; it is likely that that person is a work colleague, or someone older or in authority. If you are on a first-name basis with a Russian, you may be using the formal вы or the informal ты; it will depend on your relationship and the situation.

Finally, be careful about what first names you put with patronymics: only the full (non-diminutive) first name goes with the patronymic.

Here is an English text about our Irkutsk host, along with a word bank of Russian forms of address. Decide which way makes sense for the given situation, and check your answer by mousing over the blank. 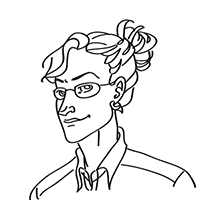