Notice how Natalya Mikhailovna asks Amanda about her tablet computer: 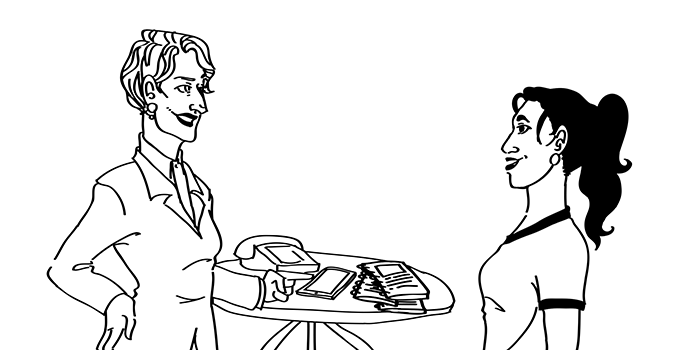 Listen again to how Natalya Mikhailovna pronounces the word что. It is pronounced as though it were spelled with a ш--[што].

When you want see an object that you want identified, ask: Что э́то? For a person or animal, you can ask Кто э́то?

Note that animals are not referred to with the question word “what” in Russian. 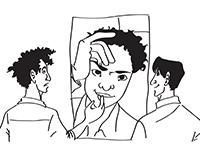 Gender of nouns ending in -ь

Imagine someone learning English as a foreign language who encounters the word “mice” or the word “geese” but does not know “mouse” or “goose.” Without other verbal or visual cues it would be hard to guess that these are plurals, certainly harder than if one encountered a word like “cows” or “horses.” When we see the word “dogs” or “dog’s” we know that there is a word “dog” -- we can “get back to” its dictionary form.

In Russian it will be very important for you to know the “dictionary form” (слова́рная фо́рма) of nouns you learn--the basic form that appears in the dictionary. For words that end in consonants, this means knowing whether or not there is a soft sign on the word; for words that end in vowels, this means knowing which vowel. The way the dictionary form looks will determine what vowel you add when you change the ending--for example, when you make the noun plural or possessive.

How well do you know the dictionary forms of words you have seen? Here is a list of nouns. Some are missing vowels or soft signs; others are in their dictionary form as they are. From the choices below add the appropriate letter to the word if necessary to complete its dictionary form. If there is no letter needed, choose the «zero-ending» ø.

Later in this section of the unit you will be learning to make nouns plural, which for most nouns means either adding a vowel (студе́нт >> студе́нты) or changing the final vowel that is on the dictionary form (пробле́ма >> пробле́мы). In order to do this accurately, you need to know the слова́рная фо́рма, which will help you know what the “base” or stem is to which you add the ending.

You have already learned that many Russian consonants can be either hard or soft. Remember that for those consonants the vowel spelled after the letter will help you tell whether the consonant is hard or soft.

So a word like ла́мпа has what is called a hard stem--the -п, as you can see by looking at the ending -а, is hard, and endings you add to the word (plural or possessive, for example) will come from the top row, just as the -а does.

A word like ту́фля (shoe) has a soft stem; the -л before the vowel ending -я is soft, and endings you add must come from the bottom row.

What about слова́рь, or крова́ть? There are no vowels at the ends of these words, but the last consonants happen to be soft--so they are written with a soft sign. The soft sign has the same function as the bottom row of vowels; it tells you  that the preceding consonant is soft. Because the last consonant is soft, these words have soft stems.  Other “soft stem” words include nouns that end in the consonant -й, and those that end in the vowel combinations -ия, and -ие.

Here are some more examples of soft stem words: