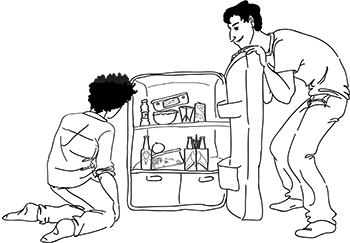 In English noun gender is related to animacy, meaning that people are grouped separately from things. In English an inanimate noun (an object, place or idea) is an “it.” "She" and "he" are used for people, while “they” can be for either people (animate beings) or inanimate nouns.

In Russian noun gender functions differently. All nouns in Russian belong to one of three genders: masculine, feminine or neuter. For nouns that refer to things, the gender of a noun has nothing to do with the meaning of the word. Gender for inanimate nouns is only a grammatical category; it is related to how the word ends in its basic (or “dictionary”) form. Figuring out the gender of most nouns will not be difficult; the table below shows how. When you replace a noun referring to an inanimate object with a pronoun, you will need to use the pronoun (он, она́, оно́) that corresponds to the noun’s grammatical gender.

Names of people and nouns referring to people will have gender in Russian, just as other nouns do. Names (like Дени́с or Ната́лья) will have the gender of the person they name: Дени́с = он; Ната́лья = она́.

Since 2015 there's been a lot of discussion in the United States about people and their choice of pronouns. The use of a singular "they/their/theirs" in English when referring to non-binary or gender-non-conforming people has grown considerably. Among non-binary Russian-speakers and queer activists there are also discussions and explorations about what pronouns to use, but no pattern of usage seems to have formed yet. You should work out with your teacher what pronouns will work best for you. Here are a few sites that can provide additional resources about usage:

For each noun on the left, determine its gender, then choose the appropriate column. Refer to the table above if you need a reminder about endings.

So far in the story of our students’ arrival in Russia you have encountered most nouns in their dictionary form. Not all new words you see will be in the dictionary form (for example, in the story you may wind up seeing a word in the plural before you see the singular). When you learn new words, it will be important that you know how to “get back to” the dictionary form for any word you know. We will include activities to draw your attention to these different forms.

Notice how the pronouns match the basic gender endings of nouns: он +ø is masculine, он +а is feminine, он +о is neuter.

Gender and nouns referring to people

Names of people and nouns referring to people will have gender in Russian, just as other nouns do. Names (like Дени́с or Ната́лья) will have the gender of the person they name: Дени́с = он; Ната́лья = она́.

What about the gender of a word like па́па? It ends in an -а, but the fact that it refers to a male determines its gender. Thus there could seem to be a «mismatch» between the noun ending (and what the table suggests might be its gender) and the actual sex of the person the noun refers to. For nouns like папа and a number of nicknames for men and boys (Ва́ня, Ми́ша, Ди́ма, То́ля, Са́ша) that end in -а, you will need to remember that names that refer to men are masculine, and names that refer to women are feminine; it will take you some time before you get to know the names well, so be ready to check if you are not sure.

For some words referring to people, there are both male and female forms of the words. So far you have encountered the following:

A number of nouns referring to people and their professions, however, exist in only one form:

You will work later on professions and nationalities.

Consider the differences in the sounds made by the letters b, p and n in the following pairs of English words.

While English has palatalization, Russian not only has it, but also uses the distinction between palatalized or soft (мя́гкий) consonants and unpalatalized or hard (твёрдый) consonants extensively, and there is greater contrast and movement between the tongue’s position when pronouncing soft and hard consonants.

Listen to the following pairs and compare the difference between these similar-sounding English and Russian words. All of the soft consonants in the Russian words are underlined.

If you learn Russian as a foreign language, how do you know when to pronounce a consonant hard or soft?  With most consonants the writing system will help you. Look at the vowel immediately after the consonant, which will indicate whether the consonant should be pronounced hard or soft. When a soft consonant has no vowel following it, softness is indicated by writing the soft sign -ь.

It is important to make a clear distinction between hard and soft consonants when you pronounce Russian words, since the difference between them is sometimes all that distinguishes one word from another.  Practice the contrast between hard and soft consonants in the following pairs of words.  If you are making the proper distinction by moving your tongue up and forward for the soft consonants and back and lower for the hard consonants, your tongue muscles may feel tired by the end of this exercise. You can check your pronunciation using the recording.

Now try pronouncing the combination: consonant + ь + vowel.  When you encounter these combinations, pronounce the consonant soft, then a full y glide, and then the vowel sound.

Listen and compare the pronunciation of these pairs of names.

Hearing the difference between hard and soft consonants can be challenging, but keep practicing.  You will be more successful if you try to imitate the pronunciation that you hear in the recordings as best you can.

Pick a small chunk of the dialog and copy it into a word processing document. Highlight all the letters that will be pronounced soft.  Then listen to the recording, noticing how the speaker pronounces them.  Then repeat, making sure to push your tongue as far forward and up as you can on those letters.

When practicing pronunciation, just pick a few soft sounds to concentrate on at a time.  Learning to soften т and д and л will go a long way to improving your accent in Russian.