When we express the idea of a person not having something, Russian uses the у + genitive to name the “owner,” plus the verb form нет (“there is not/there are not”) and then the genitive case for the item that is absent or lacking.  Here, for example is how you would say "I don't have a book":

The genitive case of masculine and neuter singular nouns has the ending –а (-я for soft stems), while feminine nouns have the ending –ы (-и for soft endings or following spelling-rule consonants).

Overview of Forming the Genitive Case

Although the genitive case has many uses, there are two main uses that you have seen this far:

1. the possessor of an item with the preposition у

2. absence with the verb form нет (“there is not/there are not”)

As you can see from the third example, both things and people can be thought of as “absent.”

Note that none of these sentences have direct objects in Russian, because they literally mean “by X there is …” or “by X there is not .…” Therefore, the accusative case is never used.

The interactive sentences below will help you see these relationships more clearly. Click on the below to see which words and cases express the following ideas.

In addition to their use in sentences for expressing “having” and “not having,” есть and нет can be used on their own to express the ideas “There is/there exists” and “There is not/ there does not exist,” respectively.  As Natalya Mikhailovna looks at the hotel room, she might wonder: 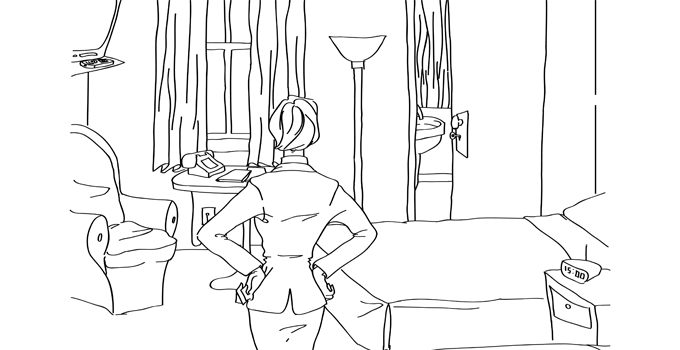 Describing Things You Have (What kind of X do you have?)

Natalya Mikhailovna might also express these thoughts about objects in Amanda and Caitlin’s room:

In Уро́к 2 you learned how to use forms of the word како́й to ask and make exclamations about the qualities of a person or thing.

You will often see an у + genitive construction in these kinds of sentences to indicate who has the object. These sentences do not use the words есть / нет because they are not focused on the existence/absence of items.  They focus instead on describing qualities of objects that we already known to exist.

In Уро́к 3 you saw how adverbs like интере́сно, легко́, тру́дно could be combined with verbs in their infinitive form to make sentences such as:

In this unit you will meet two more words that, like adverbs, are used with the infinitive form of verbs.

Strategy: If you have studied Spanish in the past, you will need to disassociate the sounds in the Russian word на́до from the Spanish word nada = “nothing.”